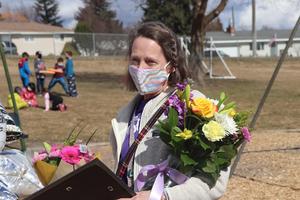 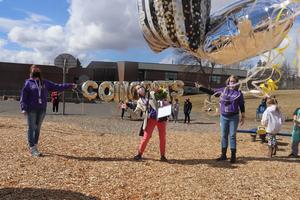 Click on the title to take you to the full story.
The Cheney School District is pleased to announce that Salnave Elementary School paraeducator Saralynn Kerr was named Cheney Public Schools’ Classified Employee of the Year in a surprise announcement at Salnave on Wednesday, March 10, 2021.
The award celebrates a classified staff member who has exhibited outstanding work performance and has contributed significantly to student or program success and to the betterment of the school district.
Mrs. Kerr was nominated by Salnave principal Celina Brennan and the entire Salnave office team, who wrote the following upon her nomination:
“Saralynn brings consistent and positive energy to work with her each and every day. She is always the first to volunteer to support students and staff, and she is a consummate problem solver. Saralynn 's dedication and passion is contagious, and she is a treasured member of our staff.”
Principal Brennan said Mrs. Kerr is known as a “cheerleader” at Salnave and is a strong support for her co-workers.
“Saralynn has embraced the challenges and changes of the past year. She continually reminds us that "we can" and offers solution-based plans on a regular basis. She has been instrumental with the orchestration of new systems and routines, while holding on to the values and collective commitment we have secured within our school. Her presence and commitment is treasured. Most importantly, we all want to be Mrs. Saralynn Kerr when we grow up!”
Congratulations to Mrs. Kerr. The District is fortunate that she has chosen to share her expertise with the children of Cheney Public Schools.