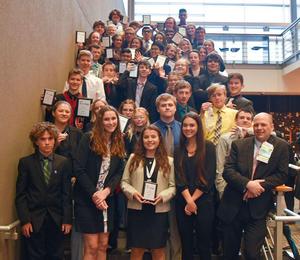 Cheney High School FBLA had a strong performance at the State FBLA conference this year. The high school team placed top 10 in 34 events and had 38 of the 43 members that attended place at least once in the top 10.

Outstanding performances for the chapter included Dylan Doney and McNaul who placed top 10 in all 4 of their events. Gasper place first and second in the only 2 events he could compete in and Schoenleber placed first and third in his events.

Also of note is that Steven Johnson was elected as the Northeast Region Vice President for the WA State FBLA Student Leadership Team. Johnson is the fourth member to hold this position over the past eight years from Cheney High School.

The state conference was held in Bellevue and had over 1,500 members from over 100 different schools attend. Cheney ended up having the 3rd most state placers behind Woodinville HS and Tesla STEM.

Below is a list of all of the events, placement and competitors.